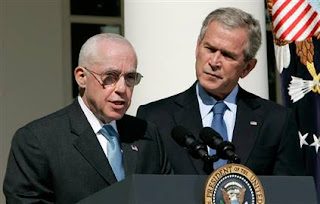 The Los Angeles Times says the CIA's destruction of some of its 9/11 torture videos may have been a violation of a court order.

Over the objections of the Justice Department, a federal judge said Tuesday he would explore whether the U.S. had violated a court order to preserve evidence when the CIA destroyed videotaped interrogations of two terrorism suspects in 2005.

U.S. District Judge Henry H. Kennedy Jr. set a hearing for Friday in Washington in response to a request from Yemeni prisoners who are challenging their detention by the U.S. at the military prison at Guantanamo Bay, Cuba.
...

The tapes were destroyed by a CIA official in November 2005, at a time of growing congressional and public concern about U.S. tactics in the war on terrorism, including interrogation techniques.

It was also five months after Kennedy, in the case of the Yemeni prisoners, issued an order requiring that the U.S. preserve and maintain "all evidence and information regarding the torture, mistreatment and abuse of detainees now" at Guantanamo Bay. According to court papers, government lawyers said at the time that a formal order was not necessary because they were "well aware of their obligation not to destroy evidence that may be relevant in pending litigation."
...

In court papers filed last week, the Justice Department argued that the videos weren't covered by the order because at the time [the prisoners shown on the tapes] were being held in secret CIA prisons overseas. The men were later transferred to the Guantanamo Bay prison.

That's a nice loophole they found there, no?

The New York Times says the White House was much more involved in pre-destruction discussions than the public has been told.

At least four top White House lawyers took part in discussions with the Central Intelligence Agency between 2003 and 2005 about whether to destroy videotapes showing the secret interrogations of two operatives from Al Qaeda, according to current and former administration and intelligence officials.

The accounts indicate that the involvement of White House officials in the discussions before the destruction of the tapes in November 2005 was more extensive than Bush administration officials have acknowledged.

Those who took part, the officials said, included Alberto R. Gonzales, who served as White House counsel until early 2005; David S. Addington, who was the counsel to Vice President Dick Cheney and is now his chief of staff; John B. Bellinger III, who until January 2005 was the senior lawyer at the National Security Council; and Harriet E. Miers, who succeeded Mr. Gonzales as White House counsel.

It was previously reported that some administration officials had advised against destroying the tapes, but the emerging picture of White House involvement is more complex. In interviews, several administration and intelligence officials provided conflicting accounts as to whether anyone at the White House expressed support for the idea that the tapes should be destroyed.

One former senior intelligence official with direct knowledge of the matter said there had been “vigorous sentiment” among some top White House officials to destroy the tapes.
...

Some other officials assert that no one at the White House advocated destroying the tapes.

Sounds like a coverup, doesn't it? But what are they covering up?

A coverup, that's what?

Last month, Democratic Sens. Charles Schumer of New York and Dianne Feinstein of California joined Republicans to ensure Michael Mukasey’s confirmation as Attorney General, even though he refused to acknowledge that the simulated drowning of waterboarding was torture.

Senate Democratic Majority Leader Harry Reid of Nevada helped the Bush administration, too, by rushing a floor vote on Mukasey before rank-and-file Democrats could get organized and push for a filibuster.

To show thanks, Mukasey [photo] now is slapping the Democratic-controlled Congress in the face by demanding it back off any oversight investigations into how and why the CIA in late 2005 destroyed videotapes of the waterboarding of al-Qaeda suspects.

Mukasey is covering up a lot more than torture, but the courageous Bob Parry won't go there. I have no such qualms. But first, let's recap, shall we?

The CIA may have violated a court order? To this administration, court orders are made to be (a) defied, or (b) used as "justification" for changing the laws they have violated, or (c) used against others. We'll see what they decide to do with this one.

The White House failed to tell the public the truth? That's been their policy forever. Get used to it. And please quit believing what they say, especially their non-denial denials!

Mukasey covered up torture? Of course he did. That was his litmus test for his appointment as Attorney General. And as Bob Parry points out, "leaders" from both parties made sure it happened.

Also: Larisa Alexandrovna says Paul Thompson has created a new section on the destruction of the tapes, at his invaluable site, Cooperative Research.