Five Arrested In Pakistan After Alleged Liquid Bomber Gets Away; AP Twirls 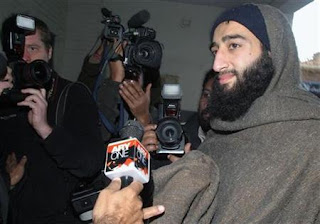 Five people have been arrested in Pakistan as a result of the investigation into the escape from police custody of Rashid Rauf, according to reports from Pakistan and from the AP.

Rauf is wanted for extradition to Great Britain in connection with the fatal stabbing of his uncle in Birmingham five years ago; coincidentally (or not), he has also been named "a key person" in the so-called "Liquid Bombers" plot, in which terrorists were allegedly planning to make bombs aboard trans-Atlantic airliners from ingredients which they would have smuggled aboard the planes disguised as beverages.

The threat -- or, more accurately, the belated over-reaction to the announced threat -- brought Heathrow to a virtual standstill for a few days; and even though the plot as described was physically impossible, some of the airport security measures put in place in "response" to the "plot" remain in force.

The arrest of Rashid Rauf in Pakistan in early August 2006 triggered the arrest of twenty-five people in the UK, ten of whom were later released without charge. The other fifteen face trial -- eleven for "conspiracy to murder" -- beginning in the spring of 2008.

In Pakistan, where all the charges against Rashid Rauf have been dismissed -- twice -- he was still being held pending extradition in Adiala Jail in Rawalpindi. But he was needed in court in Islamabad on Saturday for a hearing concerning his possible extradition, and police say he escaped from their custody after the hearing on the way back to the jail, when the constables escorting him allowed him to go into a mosque while they waited outside. 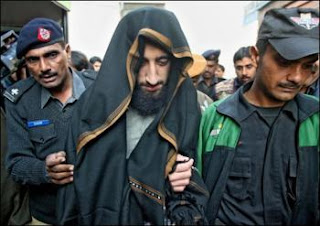 According to recent reports from Pakistan, the two constables who were escorting Rashid Rauf on Saturday [photo] are now under arrest, as are three other people, one of whom is Rashid Rauf's uncle.

Dawn has reported that the two constables who were arrested are "Head Constable Mohammad Tufail and Constable Nawabzada", but most of the other reports are vague as to who has been arrested.

The confusion is not helped by a story from the AP, which has appeared everywhere despite some obvious errors.

One of Pakistan's leading newspapers, The News, reported Tuesday that Rauf's uncle Mohammed Rafique had been in touch with one of the arrested policemen. Rafique was arrested in Kashmir this week.

It also said the officers let another of Rauf's uncles, Zahoor, talk them into letting him drive Rauf back to the jail in his own car. The officers had lunch with Rauf at a McDonald's restaurant in Rawalpindi, then unlocked his handcuffs when he went inside the mosque, the report said.

The newspaper also reported that the guards didn't immediately inform their bosses about the incident, and that they searched for Rauf for hours before reporting the matter.

Just for fun, let's compare Munir Ahmad's version of events with the relevant excerpts from the article he claims to be quoting.

The News reported Tuesday that Rauf's uncle Mohammed Rafique had been in touch with one of the arrested policemen.

Correct. The article was by Shakeel Anjum and called "Clue found to Rashid’s escape". In addition to The News, it also appeared at Pak Tribune, and was the subject of extensive discussion in a previous post.

Investigative agencies have found a clue to the high-profile escape of Rashid Rauf, linking Tufail, one of the two head constables escorting Rashid Rauf to court, and his uncle Muhammad Rafiq, reliable sources told The News on Monday.

Call records of Head Constable Tufail showed that he was in touch with Rafiq, sources disclosed, adding they had contacted each other before Rashid Rauf fled from police custody.

So Munir Ahmad starts out well, but he gets intro trouble immediately:

Rafique was arrested in Kashmir this week.

That's quite a claim. Nobody else has reported such any thing. In fact, only a day earlier, Munir Ahmad himself reported:

Rauf's lawyer, Hashmat Habib ... said Rafique had been in the Kashmir region on Saturday...

This is hearsay evidence that Rafiq had been in Kashmir -- but Munir Ahmade didn't mention anything about Rafiq being arrested in Kashmir -- and neither did anybody else. All the other detailed reports on the escape say Rafiq was with Rashid when he went into the mosque! 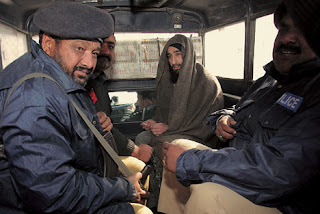 It also said the officers let another of Rauf's uncles, Zahoor, talk them into letting him drive Rauf back to the jail in his own car.

In fact, the article said Zahoor left the hearing early but Rafiq stayed until the end.

It also said that after the hearing they used Rafiq's car, not Zahoor's.

And although an article in The Post suggested that Rashid Rauf's uncle drove the car back to Rawalpindi,

Rashid Rauf, wanted for an alleged plan to blow up airliners from the UK to the US with liquid explosives, slipped away in unclear circumstances [...] after police let his uncle drive him back to jail following a court appearance, a security official said on Monday.

... The News made no mention of who drove the car:

Zahoor left the court premises around 1230 hrs, while Rafiq stayed on till the end of hearing. Sources said Rashid Rauf was being taken back to Adiala jail by head constables Tufail and Nawabzada in a private vehicle of Rafiq (Mitsubishi Station Wagon silver colour) bearing registration No: JM-2071, instead of a prison van.

The officers had lunch with Rauf at a McDonald's restaurant in Rawalpindi, then unlocked his handcuffs when he went inside the mosque, the report said.

Not exactly. The article actually said:

Guards reportedly unlocked his handcuffs and had lunch at McDonald’s at Jinnah Park, Rawalpindi near district courts. On way to Adiala jail, Rashid Rauf asked his guards to let him say afternoon prayers at a mosque located at Gulshan-e-Abad, ultimately giving him an opportunity to escape.

You will notice that The News mentions handcuffs only in the context of lunch, not prayers.

A report from a different writer hinted that the escorting constables may have removed Rashid Rauf's handcuffs before he went into the mosque:

The superintendent of the jail where Rauf was being held said that the police escorts might have even unlocked his handcuffs when he went to pray. "It is said that he asked permission to offer prayers and the two police officials who were escorting him allowed this," said Mohsin Rafiq, superintendent of Adiala Jail.

"It seems his handcuffs would have been removed to let him say his prayers," Rafiq said.

But the article in The News makes no such claim. 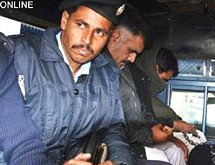 Munir Ahmad closes with a flourish:

The newspaper also reported that the guards didn't immediately inform their bosses about the incident, and that they searched for Rauf for hours before reporting the matter.

Hooray! That's one whole sentence without an error!

According to an AFP report, Rashid Rauf slipped away from the constables at around 3:00 on Saturday afternoon [1500 hours].

And the article in The News said:

Both head constables started a search for him on their own without reporting to the authorities about the incident. At 1630 hours, Adiala jail, including Hawalat, gave a clear report, without mentioning the disappearance of Rashid Rauf. At 1800 hours, both head constables after failing to find whereabouts of Rashid Rauf reported to the Margalla police station that a person namely Rashid Rauf had fled from their custody.

At 2100 hrs, the SSP received a call from the Adiyala jail superintendent, who informed him about the escape of Rashid Rauf.

So ... Munir Ahmad didn't get everything wrong. Not quite. But the record is not a good one.

On the other hand, the Pakistani record for holding onto prisoners is not a good one either. As The Post phrases it, 110 criminals escaped from police custody since 2005. So it's not as if something like this happens every day ... once a week is more like it!

Somehow I can't shake the feeling that he's gone -- for good! And according to the most recent article by Shakeel Anjum, this time the experts agree with me.

twenty-ninth in a series
File under: Pakistan, Rashid Rauf
Email ThisBlogThis!Share to TwitterShare to FacebookShare to Pinterest
Posted by Winter Patriot