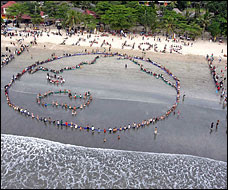 Two Washington Post headlines tell quite a tale all by themselves (but I'll give you some excerpts from the articles, too):

Throughout a week of negotiations on the island of Bali, Bush administration officials have steadily resisted a United Nations proposal calling on industrialized countries to accept a goal of reducing their greenhouse gas emissions by 25 to 40 percent by 2020. In retaliation, several European officials said they may not attend the next installment of the White House-sponsored "major economies meeting" on global warming, which is set to resume next month in Honolulu.

U.N. Secretary General Ban Ki-moon conceded Wednesday that the United States had succeeded in achieving one of its key objectives at the climate conference here, blocking a proposal that called on industrialized nations to cut their greenhouse gas emissions by 25 to 40 percent by 2020.

The message is clear:

Who cares if it's a disaster for the world's future? It's a success for US strategy!

It seems to me I've heard that one before.
File under: climate change
Email ThisBlogThis!Share to TwitterShare to FacebookShare to Pinterest
Posted by Winter Patriot