Idaho State Police Cadets' Slogan: "Don't Suffer From PTSD, Go Out And Cause It." 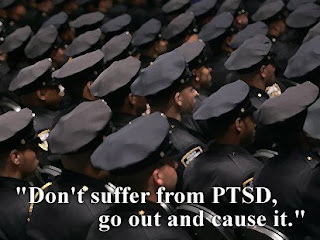 Each class at the Idaho Police Officer Standards and Training Academy is allowed to choose a slogan that is printed on its graduation programs, and [this year's] class of 43 graduates came up with "Don't suffer from PTSD, go out and cause it."

According to the Veterans Association, tens of thousands of U.S. soldiers suffer from PTSD, which causes nightmares, flashbacks and physical symptoms that make sufferers feel as if they are reliving trauma, even many years later. Crime, accidents and other trauma can cause it in civilians.

Ada County Sheriff Gary Raney, who attended the Dec. 14 graduation, pointed out the slogan to the academy's director, Jeff Black, minutes before the ceremony began, Raney said. A photograph of the program was e-mailed anonymously to news outlets throughout the state.

It's comforting to know the people responsible for maintaining peace and upholding public order hold such things in high regard.

Black said the class president was ex-military, and that the slogan "slipped in." He declined to identify the graduate.

Makes you think warm, fuzzy thoughts about the future of the country.