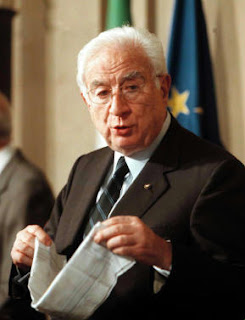 According to Paul Joseph Watson at Prison Planet, Former Italian President Francesco Cossiga has revealed to the Italian public what (according to Cossiga) all the other insiders already know:

9/11 was an inside job, planned and executed by the CIA and Mossad.

Cossiga gained respect from opposition parties as one of a rare breed -- an honest politician -- and led the country for seven years until April 1992.

Cossiga's tendency to be outspoken upset the Italian political establishment and he was forced to resign after revealing the existence of, and his part in setting up, Operation Gladio - a rogue intelligence network under NATO auspices that carried out bombings across Europe in the 60's, 70's and 80's.

Gladio's specialty was to carry out what they coined "false flag operations," terror attacks that were blamed on their domestic and geopolitical opposition.

Watson's piece refers to an article in the November 30th issue of the popular Italian daily Corriere della Sera. The article, Osama-Berlusconi? "Journalistic Trap", is about a tape in which Osama bin Laden purportedly both confesses that 9/11 was the work of al Qaeda and threatens former Italian premier Silvio Berlusconi.

... the authenticity of the tape is not confirmed by the fact that in it Osama bin Laden "confesses" that al Qaeda was behind the September 11 attacks on the twin towers in New York since all the intelligence agencies in America and Europe, especially the Italians, now know that the disastrous attack was planned and executed by the American CIA and the Mossad with the help of the Zionist world, in order to blame the Arabic countries and induce the western powers to get involved in Iraq and Afghanistan.

Paul Joseph Watson has more, including a slightly different translation.

And here's a tip of the frozen cap to our friend Jimmy Montague at The Cyanide Hole.
Filed under: 9/11, al-Q'aeda, Francesco Cossiga
by Winter Patriot on 12:06:00 PM
Newer Post Older Post Home