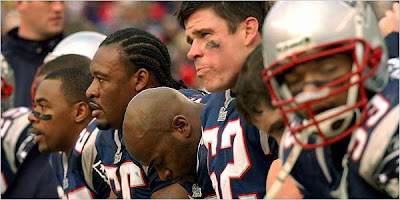 Ted Johnson [#52 in the photo] helped the New England Patriots win three of the past five Super Bowls before retiring in 2005. Now, he says, he forgets people’s names, misses appointments and, because of an addiction to amphetamines, can become so terrified of the outside world that he locks himself alone inside his Boston apartment in bed with the blinds drawn for days at a time.

Mr. Johnson’s decline began, he said, in August 2002, with a concussion he sustained in a preseason game against the New York Giants. He sustained another four days later during a practice, after Patriots Coach Bill Belichick went against the recommendation of the team’s trainer, Johnson said, and submitted him to regular on-field contact.

Mr. Belichick and the Patriots’ head trainer at the time, Jim Whalen — each of whom remain in those positions — declined to comment on Mr. Johnson’s medical experience with the team or his allegations regarding their actions.

Following his two concussions in August 2002, Mr. Johnson sat out the next two preseason games on the recommendation of a neurologist. After returning to play, Mr. Johnson sustained more concussions of varying severity over the next three seasons, each of them exacerbating the next, according to Mr. Johnson’s current neurologist, Dr. Robert Cantu.

Dr. Cantu said that he was convinced Mr. Johnson’s cognitive impairment and depression “are related to his previous head injuries, as they are all rather classic postconcussion symptoms.” He added, “They are most likely permanent.”

It's no secret that football is dangerous, but pro and college football have an interest in suppressing stories that show just how dangerous it is, especially at the elite levels, and how willing many coaches are to use injured players, despite knowing they will play less than their best, and despite the fact that their risk of further injury is heightened.

For the most part, over the years, the big media have cooperated with them on this, and the few players (or, mostly, ex-players) who spoke out about it have found their stories buried.

So I'm very surprised to see the NYT running this piece at all, let alone just before the Stupid Bowl. But then maybe they figure now's the best time, since it'll get buried by all the (pre-game, halftime, and post-game) hype -- if not by the game itself.

Or maybe they figure the game will be so boring (as it usually is) that you'll fall asleep and forget all about football, and all about Ted Johnson, till the fall.

And yes, I know Ted Johnson was well-paid for what he did, but money can't buy back your mental health when it's gone. I know football -- especially pro football -- celebrates everything that's wrong with America. And I know there are more important things to worry about, too. But it still hurts to see a cold patriot in trouble, especially a red white and blue one.

Best wishes to Ted Johnson and his family, and to all those who are suffering from permanent disabilities, whether mental or physical or none of the above.

And from one frozen Patriot to another, "Hang tough, Teddy!"