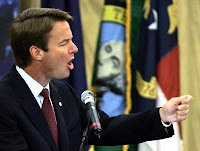 A tempest in a teapot? The shape of things to come? Or a shotgun blast through the metatarsals? What do you think?

[John] Edwards announced today, after 36 hours of deliberation, that he would keep on his campaign staff two liberal feminist bloggers with long cybertrails of incendiary comments on sex, religion and politics. Deliberations over the fate of the two bloggers, Amanda Marcotte and Melissa McEwan, created a crisis in the nascent Edwards campaign and illuminated the treacherous road ahead as candidates of both parties try to harness the growing power of the online world to their campaigns.

From Edwards' blog: "The tone and the sentiment of some of Amanda Marcotte's and Melissa McEwan's posts personally offended me. It's not how I talk to people, and it's not how I expect the people who work for me to talk to people. Everyone is entitled to their opinion, but that kind of intolerant language will not be permitted from anyone on my campaign, whether it's intended as satire, humor, or anything else. But I also believe in giving everyone a fair shake. I've talked to Amanda and Melissa; they have both assured me that it was never their intention to malign anyone's faith, and I take them at their word. We're beginning a great debate about the future of our country, and we can't let it be hijacked. It will take discipline, focus, and courage to build the America we believe in.

From the NYT again:

The case had left Mr. Edwards with difficult choices. He could keep the two women and have to answer for the at-times vulgar and intemperate writings on their personal blogs before Mr. Edwards hired them late last month. He could dismiss them and face a revolt in the liberal blogosphere, which is playing an increasingly influential role in Democratic politics and could be especially important to his populist campaign, and which saw the controversy as manufactured by conservative groups. Or, as he did, he could keep them but distance himself from their views.

Whatever happened to vetting? Was it not possible for Mr. Edwards' staff to read the archives of the respective blogs? Or did they read them and not notice that there was a peculiar sort of mismatch between their candidate's image and the image presented by the "liberal feminist bloggers" involved?

Not that image is necessarily everything everywhere, but this is presidential politics! Or at least it's supposed to be.

And there's a serious double-standard here, to be sure. The so-called "right" runs a policy based on mass murder and we don't hear a word of protest from supposedly Christian organizations like The Catholic League. But when a "liberal candidate" hires a couple of "liberal feminist bloggers" who have made "incendiary comments on sex, religion and politics", it's a great big deal to people like

Bill Donohue, president of the Catholic League, [who] said in a statement on Tuesday, “John Edwards is a decent man who has had his campaign tarnished by two anti-Catholic vulgar trash-talking bigots.”

The double-standard is despicable, in my opinion, but it's the lay of the land, well-known to all. And for that reason I would have liked to see John Edwards try to find some classy bloggers who would be able to present him and his stands on issues of the day without such baggage.

Classy bloggers? Oh yes! There are plenty of them out there. Piles of them on my sidebar, for starters. Classy webmasters, too. Start The Revolution loved my piece "An Avalanche of Bullshit", but changed the title to "An Avalanche of Lies", the better not to offend anyone. And it was ok with me. But I digress. Or do I?

I might turn out to be wrong (yep! it happens!!) but in my opinion John Edwards has done himself irreparable damage, not by keeping the "liberal feminist bloggers" onboard -- which may have been the best he could do -- but by hiring them in the first place (which was certainly not the best he could have done).

It's a shame to see promising Democratic candidates shooting themselves in the foot already! The election is almost 21 months away and already they're ... oh, never mind. I would be a lot more concerned if we hadn't already had a glimpse of the warmonger behind the slick southern populist veneer.

As always I welcome your opinions.
File under: politics
Email ThisBlogThis!Share to TwitterShare to FacebookShare to Pinterest
Posted by Winter Patriot