Takin' It To The Schools: UK Students To See 'An Inconvenient Truth' 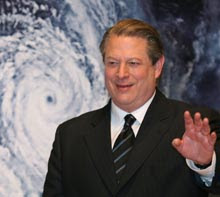 The British government will send a copy of Al Gore's film about global warming, An Inconvenient Truth, to every secondary school in the country, the U.K. environment minister announced Friday.

The announcement, made after an opposition MP suggested sending the film to every home in the country, comes the same day a panel of the world's top scientists issued a new report saying global warming is a man-made phenomenon.

U.K. Environment Minister David Miliband said An Inconvenient Truth would be sent to every school as part of an educational pack about climate change aimed at British teens.

An Inconvenient Truth, a film of former U.S. vice-president Gore's lecture tour, illustrates the dramatic change to the environment caused by burning fossil fuels. It has been nominated for an Oscar for best documentary.
...
Gore gives many examples of how individuals could help the environment, including his program of training "climate ambassadors" who will spread a message of environmental stewardship.
...
Education Secretary Alan Johnson said he hopes seeing the film will cause young people to press for lifestyle changes that will lead to lower emissions.

"Children are the key to changing society's long-term attitudes to the environment," Johnson said.

"Not only are they passionate about saving the planet, but children also have a big influence over their own families' lifestyles and behaviour."

That's for sure. Children have a huge influence over their own families. And that's exactly why "An Inconvenient Truth" will not be shown in American schools in the near future.
File under: Al Gore, climate change, UK
Email ThisBlogThis!Share to TwitterShare to FacebookShare to Pinterest
Posted by Winter Patriot