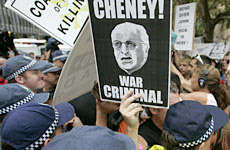 From the New Zealand Herald:
Clashes in Sydney before Cheney's Australia trip

SYDNEY - Anti-Iraq war protesters clashed with police in Sydney yesterday ahead of a visit by US Vice President Dick Cheney, underlining divisions within one of Washington's firmest allies over the unpopular war.

Police detained about six people when up to 200 Stop the War Coalition protesters, demanding Australian Prime Minister John Howard pull troops out of Iraq, tried to march from Sydney Town Hall to the US consulate.

A heavy police presence, including officers mounted on horseback, ringed the protesters in an attempt to minimise disruption to peak-hour commuters, some of whom also squabbled with police.

Protesters held placards saying "Dick Go Home & Take John With You" and "Stop Cheney, Troops Out". Police later relented and shepherded protesters as they marched towards the consulate.

There's more where that came from, and more here too.
File under: Australia, Dick Cheney, New Zealand
Email ThisBlogThis!Share to TwitterShare to FacebookShare to Pinterest
Posted by Winter Patriot