Should We Bury Our Skepticism? A Question From Mike Eber 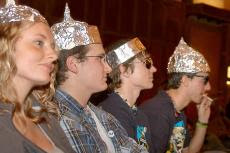 If you were interested in last week's article about the Scholars for 9/11 Truth presentation in Ann Arbor, you might also be interested in a piece written for the Michigan Daily (the U of M's student newspaper) by Mike Eber, and published today.

It's called "Skepticism, faith and Sept. 11" and it starts out like this:

Twentieth-century philosopher Paul Ricoeur once declared that "the contrary of suspicion, I will say bluntly, is faith." I am an ardent skeptic who wishes he had faith, and because of this I envy my housemate. He sees the casus belli of the self-same national events that I view with suspicion as explainable by the most commonly held assumption. He has faith, particularly faith in our nation.

I was never more aware of the difference between skepticism and faith than when I begged this housemate to come with me to the Scholars for 9/11 Truth (an organization of students, faculty members and professionals who are suspicious of the government's explanation of the Sept. 11 attacks) event last week.

Personally I have found it exceedingly helpful to turn my skepticism toward those with a track record of lying, indeed to all parties who have made a "habit" of benefitting from the misfortunes of others. In the meantime I still have faith, but not in the government.

What do I believe in? The power of the scientific method to discover physical truths, the power of truth to conquer lies (eventually), and the power of honest people to work together, among other things. But let's rejoin Mike Eber:

I compartmentalized my uneasy skepticism until hearing one of the speakers at Scholars for 9/11 Truth, Lt. Colonel Robert Bowman. Bowman was the former director of advanced space programs development in the Ford and Carter administrations and holds a doctorate from Cal Tech in aeronautics and nuclear engineering. Bowman insisted that instead of investigating the physical impossibilities of the hypothesized collapse, it would be to our nation's interest to turn our investigation instead to America's inability to carry out a proper investigation.

This is a very simple matter, I believe. It's not that America is unable to carry out a proper investigation; it's simply that such an investigation would be extremely dangerous to those who hold political power in this country, so therefore it's not going to happen. Not without a major power shift -- one which, sad to say, does not appear imminent.

Do we bury our instinctual skepticism because of fear of belittlement?

No, NO! A thousand times NO! Burying our skepticism is exactly what our enemies want us to do, whether for fear of belittlement or fear of other forms of reprisal.

I've left a couple of comments following Mike Eber's column, encouraging him and his readers to keep digging, and I invite you to visit the Michigan Daily, read the whole column, and make a comment of your own if the urge strikes you.
File under: 9/11
Email ThisBlogThis!Share to TwitterShare to FacebookShare to Pinterest
Posted by Winter Patriot