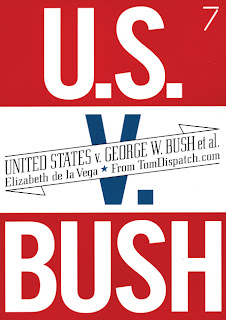 Former federal prosecutor Elizabeth Vega has written a book containing a draft indictment of the so-called president and other top administration officials for conspiracy to defraud the American people on the issue of whether or not we needed to invade Iraq. The book also includes a fictional grand jury proceeding based on that indictment.

De la Vega argues the American people are too narrowly concerned about whether Bush Administration officials lied or not, when in fact, lying is just one type of fraud.

"A scheme to defraud is any plan or course of action that’s intended to deceive another through false pretenses, representations, or promises," she writes on page 54.
...
The word conspiracy does not legally mean people in trench coats were whispering in a dark alley. It simply means a concerted effort; and the White House stated publicly in the weeks prior to the 2002 Congressional Authorization to go to war, that they were openly engaged in a concerted public relations strategy.

At only 241 small pages, this book sounds like a great gift idea! Please read the whole article.
File under: justice
Email ThisBlogThis!Share to TwitterShare to FacebookShare to Pinterest
Posted by Winter Patriot