Pakistani Police Round Up 50 Suspects After Courtroom Bomb Kills 16 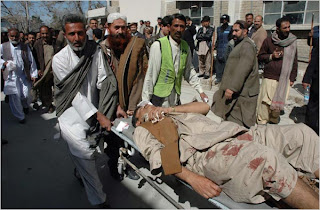 Here's Carlotta Gall reporting for the New York Times with an assist from Salman Masood:

Suicide Bomber Kills Judge and 14 Others in Pakistani Courtroom

KARACHI, Pakistan, Feb. 17 — In the sixth suicide bombing in a month, a man blew himself up in a small district courtroom in the border town of Quetta on Saturday, killing 15 people, including a senior judge, and wounding 35, officials said.

One of the 35 people who were wounded died later, thus the discrepancy in numbers.

No group claimed responsibility, but the chief elected official of the province connected it to the string of suicide attacks that have now killed some 40 people and put security forces on alert across the country.

The Quetta blast could be linked to earlier suicide attacks in Islamabad and Peshawar, said Jam Mohammad Yousaf, the chief minister of Baluchistan Province.

Baluchistan has often been the scene of bombings, linked to Sunni and Shiite sectarian groups and, to a lesser extent, Baluch nationalists who are fighting an insurgency against the government. But Mr. Yousaf said local groups lacked the expertise for suicide bombing.

The recent string of bombings began after the military carried out an airstrike against suspected militants in the tribal area of South Waziristan on Jan. 16.

A militant leader, Baitullah Mehsud, vowed to use suicide bombers to take revenge. Pakistani officials have not directly implicated Mr. Mehsud in the bombings while the investigations are under way, and he has denied any involvement, saying that his threat was an emotional outburst.

Mr. Mehsud is believed to have trained suicide bombers and sent them into Afghanistan, where there were 127 suicide attacks last year.

Militants based in the tribal areas, who are sympathetic to the Afghan Taliban and Al Qaeda, are widely believed to be behind suicide bombings in Afghanistan, and have in the past been implicated in the more rare attacks in Pakistan.

Pakistan’s president, Gen. Pervez Musharraf, Prime Minister Shaukat Aziz and an Army Corps commander have all come under attack in the last few years, as have foreign targets like the United States Consulate in Karachi and a busload of French engineers.

Officials say the attacks are prompted by Pakistan’s pro-American policy since Sept. 11, 2001. Recent attacks have focused on softer targets, with bombers often on foot and often killing civilians.

The trend is a shock for Pakistan and a stark warning for the government, which has largely ignored Afghan pleas to go after militants in the tribal areas.

The target the bomber chose in Quetta was a small district court in the center of the city, where there was little security. The bomber pushed his way in at the court’s busiest time, about 11 a.m., saying that he was due at a hearing. He blew himself up at the door of the first room he came to.

Judge Abdul Waheed Durrani, who was hearing a case involving a property dispute, was killed, along with six lawyers and relatives of the defendants. Bodies and debris littered the room afterward, and shrapnel scarred the walls.

Prime Minister Aziz condemned the attack. “That is why we are against terrorism, because it kills innocent lives,” he told journalists during a visit to Peshawar. “It is against our religion and against humanity.”

A suicide attack in Peshawar, the capital of the North-West Frontier Province, which also shares a border with Afghanistan, killed 15 people on Jan. 27. A day earlier, a bomber at a hotel in Islamabad killed a guard.

I have it from very reliable sources that if you get your news from Carlotta Gall, you can be sure it's trustworthy. Thus my rather lengthy quote.

Here's a follow-up, from News24 in South Africa:

Quetta - Pakistani police have rounded up 50 suspects as investigations continue into a courtroom suicide bombing that killed 16 people including a judge and several lawyers, officials said on Sunday.

The raids were conducted after the bomber blew himself up in a packed room during court proceedings on Saturday, killing 15.

About 35 people were taken to hospital, where one more died overnight, doctors said.

Lawyers here announced a three-day mourning period, during which they would boycott the courts.

The court compound is located near police and provincial government offices in Quetta - the capital of Baluchistan province - which borders Iran and insurgency-plagued southern Afghanistan.

Saturday's incident was the latest in a wave of recent suicide attacks in Pakistan blamed on pro-Taliban militants angry at President Pervez Musharraf's support for the US-led "war on terror".

Some of my regular readers may have been wondering why I keep covering stories from Pakistan; partially it's because I want you to realize how different Pakistan is from what you probably imagine. Do you have any idea what it's like to live in a country where the average number of terrorist attacks is about two and a half per day? Sometimes we lose sight of things beyond our own borders, and I think it's good to be reminded of what's happening in other countries.

I also want you to think about the sort of reaction would we see in our own countries if a bomb ever exploded in a courtroom. Pakistan, the only government in the world that officially recognized the Taliban, is now our closest ally in the so-called war against so-called terror, and losing people to suicide bombings every week.

[UPDATE @ 10PM ET]: This just in! A report from Australia says Pakistani police claim to have arrested two teams of would-be suicide bombers. Here's that report, with a bit of cold emphasis added:

TWO more teams of would-be suicide bombers from an organisation linked to al-Qa'ida were arrested in Pakistan yesterday, capping 48 hours of violence.

Foreign diplomats in Islamabad were warned to limit travel around the capital after a suicide bomber struck a courthouse in Quetta, capital of Baluchistan province, killing 16 people, including a top judge, and wounding 30 on Saturday.

Abdul Ghani, a government surgeon in the Bajaur region who was trying to eradicate polio, was killed on Friday by a bomb under his car, which was planted by militants who believe the vaccination program is a conspiracy to stunt the population growth of Muslims.

Senior government officials said yesterday that security had been reinforced and the violence was under control.

But Benazir Bhutto, exiled leader of the main opposition Pakistan People's Party, said the country was in crisis because of the military operations in Baluchistan and the rise of the Taliban in tribal areas.

One team of three suicide bombers belonging to the al-Qa'ida-linked and Taliban-supporting Sunni militant Lashkar-e-Jhangvi organisation was seized yesterday after a gunbattle in Karachi.

Another team of three was arrested on a train at Sukkur, in the interior of Sindh province, of which Karachi is the capital.

"We found explosives, splinters, circuits and jackets used in suicide bombings, as well as jihadi literature on them," a senior police officer was quoted as saying.

Both teams were allegedly part of the suicide-bomb campaign across Pakistan to avenge actions by the country's armed forces in the region neighbouring Afghanistan.

The wave of suicide attacks, including an attempt to blow up the Marriott Hotel in Islamabad, was launched after the Pakistan army and air force struck a suspected al-Qa'ida base in the South Waziristan region bordering Afghanistan last month.

The Quetta court bombing was the worst attack. The bomber reportedly raced into the court building, telling bystanders he was giving evidence in a trial.

He detonated the bomb in the building's licence branch. Judge Abdul Wahid Durrani died in the blast, with senior lawyers and other officials.

"Initially, we suspect nationalist extremists as well as Afghan Taliban (supporters) could be behind the attack," said a spokesman for the Baluchistan Government, Razak Bugti.

Investigators said the two teams of suicide bombers seized in Karachi and Sukkur were planning to feed sectarian strife with attacks on Pakistan's Shia minority at the end of the holy month of Muharram.

Extremists are using suspicions about the drive against polio in Pakistan -- one of the few countries still afflicted with the disease -- to stir rebellion in tribal regions.

Retired Pakistani general Ali Jan Mohammad Aurakzai -- regarded by Western diplomats as one of the best-informed about sentiment among tribal militants on the Durand Line frontier with Afghanistan -- said the conflict in Afghanistan was becoming a "war of liberation" against foreign invaders.

The Taliban were winning popular support, he said.

Referring to Taliban claims that 10,000 jihadi fighters are poised to launch a (northern) spring offensive, General Aurakzai warned they would take years to defeat.

The Kabul Government and the coalition forces had no alternative but to negotiate with the Taliban, he said.

"Eventually, all issues will have to be resolved through dialogue on the negotiating table," General Aurakzai said.