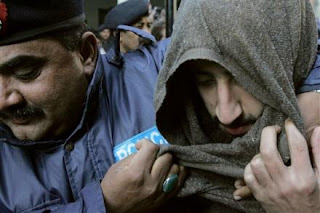 Rashid Rauf, variously described as "a key individual" or "the ringleader" or "the mastermind" or possibly only "the messenger" -- but almost certainly "the al-Q'aeda connection" -- in the alleged Liquid Bombing Plot (which was supposedly foiled by British police in August of 2006), has a date with the Pakistani Anti-Terror Court (ATC), where he will appear on Tuesday, February 13th, to resume a hearing which was adjourned February 9th.

This is surprising because two months ago -- on December 13th -- the ATC dismissed all the terror-related charges against him, and referred his case back to the regular court system.

Rashid Rauf was arrested in Pakistan in early August. His arrest somehow triggered the arrests of more than two dozen people in Great Britain and seven more in Pakistan, supposedly for conspiring to blow up passenger planes using bombs they intended to make themselves -- out of common household liquids -- while the planes were in flight.

Even though it was quickly shown that such a plot was physically and chemically impossible, British authorities clamped down on airport security, restricting carry-on luggage, requiring close inspections and costing the airlines millions of pounds. Substantial vestiges of the new airport restrictions remain, as do several other pieces of the Global Tyranny Puzzle which were put in place after the alleged plot was supposedly foiled. Further investigation of the circumstances surrounding this so-called plot has led this cold blogger away from the question of whether or not it was a hoax, to the more interesting question of what sort of a hoax it was.

Late in December, after the ATC had dismissed the terror charges, the government appealed for (and was granted) a delay on the dismissal; they also applied for and received a three-month extension of Rashid Rauf's detention. This then gave them time to arrange his reappearance Feb 13th at the ATC.

Strangely, perhaps (or not!), Rashid Rauf's legal roller-coaster has received steadily decreasing attention in the West; a great deal was made of the ATC's December decision to dismiss the charges, but the current news -- that the charges have been reinstated (or perhaps just continue to be in effect) -- has received no attention outside Pakistan.

It's almost as if the British and American news media wanted this story to go away.

So here are a few more of the details:

Rauf lawyer Hashmat Habib told the court that he had not been informed about the remand of the case back to the ATC and that the Punjab prosecutor general had filed an application in the Lahore High Court (LHC) against the deletion of terrorism charges against his client.

He said that the Punjab prosecutor general was not eligible to file an application against his client in the LHC because he was a government employee.

He said a legal inspector had told the District and Sessions Court on February 1 that the case should be referred to the ATC according to a ruling of the LHC.

Habib said that he would file a contempt of court case against the Punjab home secretary and other officials including the Punjab prosecutor general for filing the application in the LHC against the deletion of terrorism charges against Rauf.

There's no telling what might happen next, but I'll keep you posted.

fifteenth in a series
File under: liquid bombers, Rashid Rauf, tyranny
Email ThisBlogThis!Share to TwitterShare to FacebookShare to Pinterest
Posted by Winter Patriot