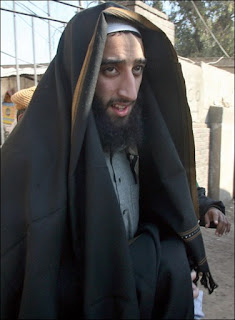 Pakistani Interior Secretary Syed Kamal Shah has said that Pakistan will not extradite Rashid Rauf to Great Britain, at least until "investigations" in Pakistan are complete, if I am reading some slightly garbled foreign news reports correctly. Rashid Rauf was variously called "the mastermind", "the ringleader", and "a key person" in the alleged Liquid Bombing plot that was supposedly foiled in Britain in August.

Pakistan has refused to hand over to British authorities a suspect of the alleged plot to bomb UK aircraft in August 2006, a senior official said on Wednesday.

Rashid Rauf, a dual citizen of Britain and Pakistan, was arrested in Pakistan in August last year a day before the arrests were made in Britain.

Pakistan has turned down a request from the British authorities to hand over Rashid Rauf, Geo television quoted Interior Secretary Syed Kamal Shah as saying.

Shah has reportedly said that Rashid Rauf is under trial in Pakistan and cannot be handed over to Britain unless the investigations are completed.

Did you notice he said "unless", not "until"? That's a big "unless", judging by the history of this case so far.

Rashid Rauf was arrested last August, but Pakistani authorities didn't even admit he was being held on terror-related charges until the end of October.

In December 2006 the anti-terrorism court in Rawalpindi found no evidence that he had been involved in terrorist activities, and his charges were downgraded to forgery and possession of explosives.

Possession of explosives? He is alleged to have had hydrogen peroxide, not nitroglycerin!

Rauf has denied all terror charges in court.

One of Rauf's brothers, Tayib Rauf, was among those arrested in Britain, although he was later released without charges.

Interestingly, under British law, suspects may be held up to 28 days without charges; after that they must be either charged or released. Tayib Rauf was detained for two weeks and then released; one might have expected the British to keep him as long as possible if they really believed his brother was in the middle of it ... but I digress.

U.S. and British officials have claimed Rashid Rauf had a key operational role in the alleged plot.

All sorts of claims were made at the time, and later.

It was said that the "terrorists" were going to "attack" ten or twelve airplanes, more or less simultaneously. Never mind that an attack such as the police described on even one plane would be impossible.

It's been clear for a long time that taking at face value the claims of (named or) unnamed U.S. and British officials is a very bad idea.

In Pakistan, law enforcement authorities continued to interrogate Rashid Rauf over his alleged key role in the plot.

It's hard to imagine what they could be asking him. Maybe they should ask him how the hydrogen peroxide he was carrying in Pakistan could be used to blow up airplanes flying from Britain to America.

Was Rashid Rauf going to ship that hydrogen peroxide halfway around the world, to people who could easily buy the same thing in a corner drugstore? It's often said that terrorists are devious, but wouldn't this be a bit much?

So the questions raised by the IRNA report had to wait for further clarification.

Fortunately, some four hours later, Pakistan Times came to the rescue, clarifying everything with the following text [and this is verbatim, too!]:

Pakistan rejects to hand over Rashid Rauf to UK

He was talking to Director Anti-Terrorism Britain William Nye here Wednesday, who called on him demanding the Pakistan government to hand over Rashid Rauf to British authorities.

A case against Rashid Rauf has been registered according to four sections of Pakistan Penal Code includes 468, 420, 419, 471 and 5 explosive act, as it was still unclear what purpose the hydrogen par oxide recovered from Rauf meant to be used, he said.

Yes indeed, it is extremely unclear for what purpose the hydrogen peroxide recovered from Rauf was meant to be used. Hydrogen peroxide can be used as an ingredient in a homemade bomb, but it can also disinfect wounds, of course. And considering that the alleged plotters contemplated mixing their Liquid Bombs on flights from Great Britain to the USA, it is difficult to see how a few bottles of hydrogen peroxide in Pakistan were going to help them. But I suppose anything is possible.

And Director Anti-Terrorism Britain William Nye may well be very disappointed. His boss has made a substantial donation to the Pakistani government recently, hundreds of millions earmarked for "moderate madrassas" but with all the appearance of a quid-pro-quo arrangement which went horribly wrong for Britain and turned out to be quid-pro-nullo instead.

The news that Pakistan won't extradite Rashid Raif anytime soon has since been reported in India and Pakistan. (And now it's on Yahoo News as well, so guess what? The yahoos are having a boo at it too.) All these more recent reports say "unless" as well, based on this excerpt from the Pakistani news service Dawn:

“Rashid Rauf is also an accused in a case being tried in Pakistan, and according to the law of the country, he cannot be handed over to the UK unless the case is decided,” a senior official of the ministry told Dawn.

So, "unless" it is ... meaning: there may still be a chance that the British can get their paws on Rashid Rauf, after the Pakistani "investigations" are completed. If they are ever completed.

Perhaps fortunately for Rashid Rauf, and perhaps also fortunately for the Brits who seem so anxious to get their hands on him, Pakistan seems determined to protect him from any serious interrogation. His jailers didn't even bring him to his court date last week, which was quickly adjourned. No date has been set for resumption, and Pakistani authorities now claim the right to hold him without any further charges until August!

Tony Blair will be gone by then, so he won't need any further news of this bunch, will he? And quite clearly the entire so-called plot was -- from an operational standpoint, at least -- doomed to fail. So it may be in the best interests of British authorities to fail to extradite Rashid Rauf; that way there'll be no opportunity for him to stand up in a British court of law and tell the truth. Unless I am way way wrong, the truth in this case could prove very embarrassing to Tony Blair personally, and to unnamed U.S. and British officials in general.

And for this reason I have suspicions about Britain's attempt to extradite Rashid Rauf. There's a certain aroma about the whole thing, always reminding me of the possibility that all of Britain's maneuverings on this issue may be for public consumption only, not to be taken seriously by their friends in Islamabad. In which case Pakistan, rather than protecting Rashid Rauf from the British, could be seen as simply "doing the dance", going along with Britain's "public diplomacy".

And after all, isn't this what allies do for each other?