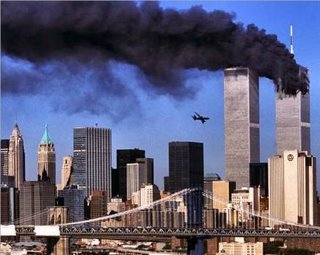 Here comes a load of manure from the the BBC:

We're all conspiracy theorists at heart

Why are conspiracy theories so popular? We may not always believe what we're told, but we still can't resist listening to them. Guy Smith, producer of 9/11: The Conspiracy Files, suggests the answer may lie deep within us all.

Did you catch that? It's deep within us all; i.e. it has nothing to do with whether the official stories purporting to explain these great national tragedies bear any relation to the physical evidence allegedly supporting those stories. Really. I'm sure that's all it is. And if you don't believe me, read Guy Smith:

I admit it. If I'm being really honest, I can't deny that I'm a bit of a conspiracy theorist. Perhaps we all are.

It's easy to dismiss all conspiracy theories as "bunkum", but remember just occasionally they do turn out to be true. Remember Watergate? Iran-contra? Special Branch collusion with loyalist terrorists in Northern Ireland?

As Jim Fetzer, one of the leading 9/11 conspiracy theorists, says: "Just because you're paranoid, doesn't mean they aren't out to get you."

Now watch this! It's the old fake-em-over-here and then run-over-there play. A counter-trap, in American football terms. He makes an opening nod to Fetzer, and claims to be a "conspiracy theorist" (whatever that means) and then goes in the other direction.

I've just spent the best part of nine months investigating the numerous conspiracy theories surrounding the al-Qaeda attacks on 11 September, 2001.
...
The deeper you dig in the dark world of conspiracies, the more you realise that different theories share much in common. The conspiracy theorist seizes on any apparent inconsistency and from that germ of truth the story is built up.

Ahem. From that germ of truth an investigation is started.

What happened to the white car apparently involved in Diana's accident? Was there a second gunman on the Grassy Knoll? And why did it take so long to scramble US fighters on 9/11?

All good questions, no?

And we can't help but be fascinated by them.

But why? Here's the place where Mr. Smith diverges from reality:

Perhaps it's because deep down, we're all story tellers. It's one of the things that makes us who we are. Since the dawn of time, we've been creating heroes and monsters as a way of trying to make sense of the world. In the beginning, we told those tales round camp fires. Now, it's through internet chat rooms or on mobile phones. But it's still basically the same process - weaving stories out of real life.

That's the mis-direction. I'm a conspiracy theorist, Iran Contra, blah blah blah, we're weaving stories out of real life. As a matter of fact, we are mostly asking questions about stories we were told by known serial liars which allegedly explain national and global tragedies but which in fact have virtually no relation to the physical evidence which allegedly supports these stories. And speaking of Iran-Contra, forgive me but aren't these the same guys?

If Mr. Smith had spent nine months investigating the attacks of 9/11 with an open mind then he might have learned something truly useful, but as you can see from his introduction, he spent nine months investigating the numerous conspiracy theories surrounding the al-Qaeda attacks on 11 September, 2001 -- in other words he started out with the official conspiracy story in his head and spent the next nine months fleshing it out, in order to make a documentary for BBC which is going to amount to nothing more nor less than Popular Mechanics on skates.

In this column, Guy Smith lays the groundwork for his work of massive fraud. He's about to become an accessory-after-the-fact in a case of mass murder on an unimaginable scale, which means he's obliged to descend into the world of absolute falsehood. He goes gently and elegantly, and he precedes his descent with admirable deception, but into the world of absolute falsehood he certainly does go.

When something awful, inexplicable or just plain evil rocks our world, we have an instinctive need to construct elaborate explanations to try and make sense of our anxiety and fear.

In the JFK assassination, for instance, we were told on the very evening that the case had been solved: it was a communist, acting alone, who had done the deed, he'd been caught, no problem, and nothing to worry about. So the nation relaxed -- into an ocean of grief.

It was easy to believe the one-lone-nut tale of Lee Harvey Oswald, because it was so simple. And it was only later that we started to find out that the official story was not only dubious but actually contradicted by the physical evidence.

After that whenever something really bad happened, it got harder and harder to get the evidence.

When Princess Diana was killed, we were told it was simply an auto accident -- well, who could do anything about that? Except grieve. And we did.

And it was comforting to know there was a simple explanation. The world is complex enough, daily life is sufficiently taxing, people tend to buy the simplest possible explanation for virtually anything.

Except when it doesn't make sense. And when it turned out that the car in which she died was sealed away and there was no public examination of any evidence to support the official story of that horrible event, it was natural for people to wonder whether what really happened and what we were told happened were one and the same. And the more they dug, the more they doubted.

When 9/11 happened, it was the same thing all over again only bigger. Awesome waves of grief swept the world, and the story came out fast and simple. Nineteen hijackers armed with box cutters had hijacked four commercial airliners simultaneously and they all crashed. Two of them smashed into gigantic office towers and a third hit the most heavily fortified building on the planet.

Neither the national capital nor the the business capital of the world had any appreciable air cover that day, and the two office buildings which were hit by planes burned for a little while and then disintegrated -- didn't fall apart but turned to powder!

How much more absurd could it get? Even before a third building -- which was not hit by any plane -- turned to powder later in the day, the story we were being fed sounded impossible to anyone who had their wits about them at the time.

But most people didn't have their wits about them; they were shocked and horrified and utterly distraught. Some had no capacity for rational thought whatsoever. At that point, we were most vulnerable to being fed a line of bull, and that's exactly what happened. People found it easier to believe the relatively simple official conspiracy theory than to ask hard questions about what they had just seen and heard, and to accept the even harder answers that would inevitably follow.

As an aside, but a crucial one, let us never forget that the official story of 9/11 involves a most unlikely conspiracy. We're all "conspiracy theorists" on 9/11, unless anyone of us can imagine a scenario in which the 19 hijackers were working independently!

Now, more than five years later, with the American people beginning to regain their wits, the official conspiracy theory sounds even more implausible, the failings of the so-called investigation are even more obvious, and quite a number of people who used to think I was crazy are not so sure.

Time to roll out more lies!

Many eye-witnesses to 9/11 thought, "This terrible event can't just be something as simple as 19 young hijackers armed with pocket knives. There must be more to it than that - because the alternative is just too horrific to contemplate."

No, sorry. Close, but no cigar! We thought: "This terrible event can't just be something as simple as 19 young hijackers armed with pocket knives. There must be more to it than that - because if this is it, if this is the whole story, they never could have done it."

The official story of 9/11 is comforting because it's simple, and because all the villains are foreign, but it's difficult to believe because it doesn't make very much sense.

So it's disgusting but not surprising to see this BBC producer claiming to be a conspiracy theorist and saying exactly the opposite, just prior to the airing of the so-called documentary he has made. But such is life in the twenty-first century, I suppose.