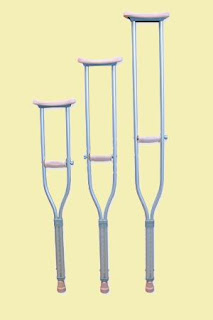 Attorneys for I. Lewis "Scooter" Libby have called in the crutches, opting for a Totally Lame Defense in his perjury trial, rather than risking possible courtroom confrontations between Prosecutor Patrick Fitgerald and either Vice President Dick Cheney or the defendant himself.

So one of the sharpest lawyers in the country will sit mute rather than testify in his own defense, and the man scheduled to be his star witness -- arguably the most powerful "elected" official in the country -- will not appear on his behalf either.

And why? According to Amy Goldstein and Carol D. Leonnig in the Washington Post,

Outside legal specialists said that Libby's attorneys appear to have concluded that the risks of exposing the defendant and the vice president to cross-examination on the witness stand outweighed the benefits they could provide in establishing Libby's innocence.

It's not difficult to imagine a point of view from which the potential risk of exposing Libby and/or Cheney to cross-examination far exceeds any potential benefit.

The WaPo reporters spoke with

Randall Eliason, a former chief prosecutor of white-collar crimes for the U.S. Attorney's Office in Washington

both of whom said, according to the report,

that Libby's defense team is experienced and must be confident that it has established reasonable doubt in cross-examination of prosecution witnesses.

Of course, other options are possible. Perhaps they've reached one of the jurors and know the verdict in advance. Or maybe they've decided to throw Libby overboard, rather than risk what might happen if either Libby or Cheney had to testify under oath.

"It's a pretty tepid defense that's been mounted, and I wouldn't even say mounted," Tobias said. "There was all this information to suggest the defense was going to put on more of a defense than we saw."

And who, exactly, wouldn't mind throwing Libby to the wolves? Is this a clue?

Yesterday afternoon, just before the jury was excused for the day early because of the Washington ice storm, Wells told Walton that the defense team had just decided that it would "release" Cheney as a possible witness.

Oh, the defense "just decided" it would "release" him? Well, that's just fine, isn't it?

Maybe not so fine if you're Libby, but perfect if you're Cheney!
File under: Dick Cheney
Email ThisBlogThis!Share to TwitterShare to FacebookShare to Pinterest
Posted by Winter Patriot