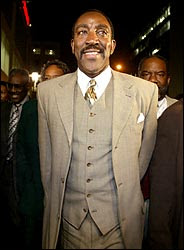 Clarence Norman Jr., the deposed Democratic assemblyman and party leader from Brooklyn, was convicted today on charges that he shook down judicial candidates seeking party support...

It was his fourth trial for corruption in two years, and his third conviction!

In the latest case, Mr. Norman was found guilty of attempted grand larceny in the fourth degree by extortion; grand larceny in the third degree by extortion and coercion in the second degree. He was accused of forcing two white candidates for civil court judge to pay thousands of dollars to favored campaign vendors to retain his organization’s support in the 2002 primary.

Right! Sell the endorsement. Because who cares about the issues anyway? We've got cynical parasites on both sides of the aisle.

The jury handed up its verdict after less than three days of deliberations. It appeared to have adopted the prosecution’s view that Mr. Norman, once the leader of one of the largest Democratic Party organizations in the country, had sold out his public trust for the sake of financial greed and political power.
...
“Clarence Norman is no hero,” Michael Vecchione, the assistant district attorney, told the jury before they began deliberating on Wednesday. “Clarence Norman is no champion of civil rights. Clarence Norman is a thief.”

How can I tell? Look at this:

The defense argued that Mr. Norman was a skilled political strategist, doing what was necessary for Democratic candidates to win.

Did you catch that? The defense didn't even try to pretend he didn't do anything wrong. Instead the defense argued that Democratic candidates cannot win without extortion! and that therefore extortion by Democratic bosses is acceptable!

I'm glad the jury didn't endorse this particular brand of mental illness! And this makes three out of four.

In his three previous political corruption trials, Mr. Norman was convicted in two of them and acquitted in one. He faces a total of two to six years in prison for the earlier convictions.

Two to six years in prison is a pittance compared to the heinous crime of betraying democracy for personal gain. I hope all thinking Americans will join me in condemning all corrupt politicians, regardless of their party affiliation.

They really don't deserve to be IMPEACHed!
File under: corruption, manure, politics
Email ThisBlogThis!Share to TwitterShare to FacebookShare to Pinterest
Posted by Winter Patriot