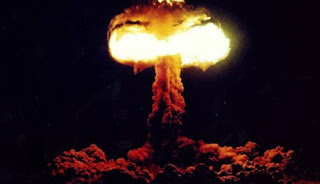 Michael Smith via Larisa says top US brass are prepared to resign if Bush orders an attack against Iran, amid questions as to whether an attack would be merely "reckless" or simply "impossible".

“There are four or five generals and admirals we know of who would resign if Bush ordered an attack on Iran,” a source with close ties to British intelligence said. “There is simply no stomach for it in the Pentagon, and a lot of people question whether such an attack would be effective or even possible.”
...
A generals’ revolt on such a scale would be unprecedented. “American generals usually stay and fight until they get fired,” said a Pentagon source. Robert Gates, the defence secretary, has repeatedly warned against striking Iran and is believed to represent the view of his senior commanders.

Faced with the most awesome choices a simulated environment could present, placed in a situation that was designed and advertised as a rehearsal for what might one day be terrifyingly real, Rumsfeld had one primary response. He always tried to unleash the maximum amount of nuclear firepower possible.

If Cockburn has this right, Dumsfeld was an even more reckless maniac than we ever suspected -- difficult to imagine but quite possibly true! So it's a good thing he's gone ...

... unless he isn't! The Washington Times says Dumsfeld still goes to work at the pentagon every day, where he has a staff of seven, and Mike Whitney argues this means he's still running the works, not Bob Gates, who (as Michael Smith points out) has been among the voices warning the so-called president not to attack Iran.

Meanwhile the so-called vice president has made a "surprise" stop in Pakistan, where he has instructed Pakistani General President Pervez Musharraf to get tough on al-Q'aeda, which sounds pretty good until you read Sy Hersh, who says the USA is once again funding al-Q'aeda-related groups in the Middle East. The veep express was supposed to have stopped in Afghanistan, too, but that was cancelled because of "bad weather". Fog? Flak? What scared them off?

At Empire Burlesque, Chris Floyd has posted an excellent analysis of this particular criminal insanity.

Today, the time lag between a criminal policy and its consequences grows much shorter all the time -- just as the virulence of that response is potentially much greater. For example, the United States engineered an illegal and stupid "regime change" in Iran in 1953, but did not have to face any direct consequences of this folly for more than a quarter of a century, and even these consequences were relatively limited. But there is general agreement that an attempt at "regime change" in Iran now would result in horrific consequences, immediately, including the possible collapse of the oil-based global economy, Shiite uprisings throughout the Middle East (especially against American forces in Iraq), "asymmetric" retaliation at American targets both at home and abroad and other pleasantries. (Similarly, the lag time between supporting the global jihad – which began in 1979 under Democrat Jimmy Carter – and the first fruit of that blowback, the first bombing of the World Trade Center, was just 14 years. How short will be the blowback from this latest arming and funding of al Qaeda and other Sunni extremists? A few years? A few months? Or right now – as many of these groups are allied with the Iraqi insurgents?)

It may be very true that the United States cannot "get away" with such extravagant stupidities anymore. But unless I am reading this way wrong, our so-called leaders have no intention of stopping now, let alone turning back.