Did NASA Start The 'Moon Landing Was A Hoax' Hoax? 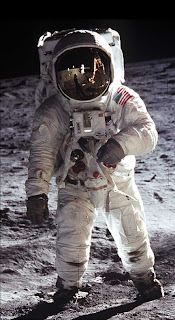 Before I started surfing in my copious spare time, I used to listen to a lot of talk radio. It's a difficult way to gather information, because you only get what they're giving you, and of course you can't search for what you want, the way you can do on the net. But I stayed away from wingnut radio, and I found some broadcasts that interested me. This post it about one of those broadcasts.

Unfortunately, it was a long time ago and I didn't take any notes. I forget who the host of the show was; I also forget the name of the guest. But I do remember a lot about the interview.

The guest was a journalist looking back on a long career. He had worked for CBS, beginning in the late 60s, and he had a lot to say about Watergate and Richard Nixon and Daniel Schorr's role in the events of the time. Fortunately for me, I was very familiar with this subject, and my familiarity gave me a way to assess the guest.

Assessing the credibility of a radio interviewee is always difficult, because you don't get the body language. This is especially true if the host prefers to let him speak, rather than challenging him on every point he raises. After spending a while struggling with this problem, I eventually settled on a plan: when the guest was talking about things I knew, I would pay close attention, and if I heard even one statement I considered a lie then I would turn the radio off. But if the guest seemed to have his facts straight when talking about things I knew about, I would listen to what he said about things I didn't know about. I wouldn't necessarily take everything he said as carved-in-stone truth, but at least I would listen.

Back to the interview: the guest talked for about half an hour about Watergate and Nixon and Schorr, and he mentioned Bob Woodward and Carl Bernstein and Hugh Sloan, and what he said about all these people seemed spot-on to me. So I didn't turn him off. And when he headed in a direction I knew nothing about, I continued to pay attention.

I don't know whether the story I am about to relate is true, but I can tell you that everything else the guest said during that interview was based on undisputed historical fact.

I don't have a transcript, and I am working from memory here, so the wording will probably not be exact, but the story he told went just about like this:

It was the summer of '69 and I was a cub reporter. I had worked for a local TV station and covered some local stories, but now I was with CBS and covering my first national story. The story was about the first moon landing, and I was assigned to cover a NASA press conference. It was the strangest press conference I've ever attended.

There was a man there who was handing out flag pins -- little pins showing an American flag, made out of mylar or something similar. It was shiny plastic, which nobody had ever seen back then, and everybody wanted one of these pins. The man giving away the pins was also handing out pamphlets claiming that the NASA moon landing was a hoax. And here's the strangest part: he was being led around the room, and introduced to the reporters, by a NASA public relations man.

The PR man would lead him to a group of people and interrupt their conversation to say: "Here's somebody with some interesting information for you." And then the other guy would say "Would you like a flag pin?" and everybody would say "Yes", and that was his entree. He would talk about the pamphlets he was handing out, and he was very low-key about the whole thing; he would say things like "I just wanted you to know that the moon landing is a hoax. Here's some literature about it." And he would hand out his pamphlets and talk to you for a minute or two, and then move on to the next group of journalists.

I watched him the whole evening; he spent hours working the room, talked to all the journalists who were there, and he was always introduced by this NASA PR man.

Finally the host interrupted and asked the question I had in my mind: WHY? Why would NASA start the rumor that the moon landing was a hoax?

And the best I can remember, the guest said:

I've been thinking about that question for my whole adult life. And here's the best explanation I've been able to come up with:

NASA knew that they were not going to release all the information they gathered. They knew there would be critics who would ask for more information than they were prepared to share. So they "poisoned the well", so to speak. By starting rumors that the moon landing was a hoax, they created a situation where they could paint all their critics with the same brush. Now whenever anyone criticized NASA or suggested that they were hiding information they should be releasing, NASA could say, "We have all kinds of critics, including people who don't even believe we went to the moon. They're quite preposterous, really, and not worthy of a serious response."

If this explanation seems strange, and almost pointless, stop and think about the disinformation that has been spread around in the wake of every other major event of our lifetimes.

What does NASA have to hide? That's a very good question, and it's tied in with another good question: Why was JFK so anxious to go to the moon?

These are questions for another day, perhaps. But for now I just want to put the following idea on the table:

Maybe the reason why so many people think the moon landing was a hoax is because NASA started a rumor to that effect.
Filed under: JFK, NASA, RFK, spending
by Winter Patriot on 11:45:00 AM
Newer Post Older Post Home