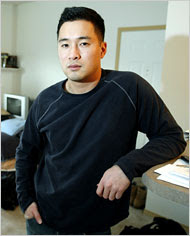 Yesterday at Fort Lewis, Washington, the Army began its court-martial of First Lt. Ehren Watada, who has refused deployment to Iraq because he believes the war is illegal.

To those who have been following along during the past five or six years, the assertion that "the war in Iraq is illegal" seems completely obvious. And, possibly because the Army cannot dispute the contention, an Army judge has ruled that Lt. Watada cannot use the illegality of the war as a defense against the charges he faces.

According to William Yardley in the New York Times,

“From what I understand, that under military law those in the military are allowed to refuse — in fact, have the right to refuse unlawful orders — a duty to refuse,” Lieutenant Watada said last month...

It is also my understanding that soldiers do have a duty to refuse illegal orders. And it's very difficult for me to see how any order to participate in an illegal war can be considered a legal order.

So it is completely Orwellian -- and thoroughly unsurprising -- that

the judge, Lt. Col. John Head, reinforced on Monday an earlier ruling that Lieutenant Watada could not base his defense on his contention that the war is illegal.

After all, if the war is illegal, and if you can get out of fighting for that reason, what's to stop hundreds or thousands of soldiers from doing the very same thing Lt. Watada has done?

Therefore the Army will go to any lengths to deny Lt. Watada his due.

On Monday, Army prosecutors and a defense lawyer, Eric Seitz, interviewed potential jurors drawn from a pool of officers on this post. Under questioning, several officers said it was “odd” that Lieutenant Watada refused to go because, as one put it, officers “should support our leadership and our tent command.”

Wrong again! His duty is to support our Constitution. He has no duty to support "our leadership" if they are engaged in illegal activities.

At Nuremburg, in the War Crimes trial which followed the second World War, some German soldiers attempted to justify their actions on the grounds that they were "just following orders", but this line of defense was not accepted. According to the tribunal which tried the Nazis, their orders were illegal, so it was their duty to refuse them.

Wikipedia's article about the Nuremburg Principles makes this very clear:

The wording is very clear indeed, and a dozen high-ranking Nazis were hanged for contravening them.

But now, in the Watada court-martial, an American soldier is being told his first duty is to obey orders, and that his opinion as to whether or not they are legal is of no concern.

But ... is it really just his opinion? Or is the war really illegal?

In a piece for yesterday's Guardian, Colonel Tim Collins, former commander of the Royal Irish Regiment in Iraq, wrote:

The legal case against the war is unproven conjecture

which shows what he knows about it. The architects of this war knew it was illegal, and at least one of them actually said so in public in November of 2003:

International lawyers and anti-war campaigners reacted with astonishment yesterday after the influential Pentagon hawk Richard Perle conceded that the invasion of Iraq had been illegal.

In a startling break with the official White House and Downing Street lines, Mr Perle told an audience in London: "I think in this case international law stood in the way of doing the right thing."
...
Mr Perle, a key member of the defence policy board, which advises the US defence secretary, Donald Rumsfeld, said that "international law ... would have required us to leave Saddam Hussein alone", and this would have been morally unacceptable.

So that much, at least, is clear. But why let the truth stand in the way of a good story? Colonel Collins continues:

By submitting to military law, you surrender your citizen rights for the order and discipline of the military. [...] The odd prima donna believes that what they think matters more than duty. In service life, it does not. There is a clear option to resign.

According to William Yardley in the NYT,

Lieutenant Watada, of Honolulu, asked to go to Afghanistan instead of Iraq but he was denied. He also tried to resign but was denied.

So much for those options. Not very attractive options, either.

Oh, by the way: the war in Afghanistan is illegal, too.

Supporters of Lt. Watada may be found at the following sites:

(Thanks to Mike Barber of the Seattle Post-Intelligencer for these links.)
File under: Donald Rumsfeld, Iraq, Nazis, Saddam Hussein, war crimes
Email ThisBlogThis!Share to TwitterShare to FacebookShare to Pinterest
Posted by Winter Patriot