Iranian Leader Rejects US Allegations re: Weapons in Iraq and Iran's Nuclear Ambitions 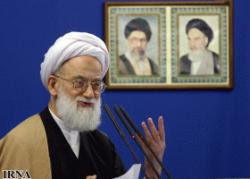 From the (Iranian) Islamic Republic News Agency [edited for clarity]

Ayatollah Mohammad Emami Kashani, [the] substitute Friday prayers leader of Tehran, rejected new US charges that Tehran was involved in Iraq's unrest, and dismissed a claim alleging that Tehran had attempted to gain access to nuclear weapons, saying, "Iran does not intend to access atomic weapons," and "Reports and inspections by the International Atomic Energy Agency (IAEA) prove the issue," and "Nuclear weapons do not bring power."

"Nuclear energy is a pretext. [Iran's] enemies intend to destroy (the Iranian nation's) greatness," he said.

He urged enemies of the Islamic Iran to hear [the] message of the people on [the] importance of access to nuclear [power] know-how and technology.

Referring to enemies' plan to cause a strife among Shiites and Sunnis, he called on Muslim nations to take the plots into consideration.

He also condemned [the] recent measure of the Zionist regime in destroying parts of Al Aqsa mosque and called on the Islamic world to react to the act.

File under: Iran
Email ThisBlogThis!Share to TwitterShare to FacebookShare to Pinterest
Posted by Winter Patriot