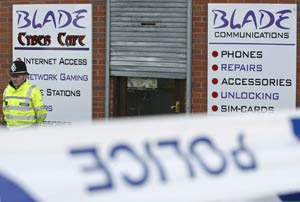 The bogus terror dance continues in Great Britain, where last week nine Muslim men were arrested, supposedly for plotting to kidnap and behead a Muslim British soldier and post a video of the decapitation on the internet.

Two of the nine were released without charge early Wednesday morning. None of the remaining seven suspects has been charged with a crime.

According to reports from BBC and elsewhere, the two ex-suspects said

in a statement after their release that police had made no mention to them of an alleged kidnap plot.

One of the men released Wednesday, Abu Bakr, has said that

of the other men arrested, one was his friend, he had previously met another and did not "have a clue" about any of the others.

Oh well, water under the bridge, get over it, move on, pip pip cheerio ... Right?

[Mr. Bakr] had been released by police on Wednesday morning and told to "go back to things how they were", he added.

"But they don't realise that, after seven days of virtual torture for my family, it's going to be hard to readjust," he added.

They realize it. It just doesn't matter to them.

"This is going to affect me for the rest of my life."

Of course it will. But who cares, Mr. Bakr? Not your government. And not ours either.

As far as they are concerned, you are merely a pawn in their game of rule-by-fear.

As are we all.

Even the British police have been critical of the way in which the UK government has used this case to divert attention away from the growing corruption scandal which threatens to devour Tony Blair, lies and all.

Whitehall officials briefed journalists early [last] Wednesday before all of the suspects had been found, with the result that lurid details of the alleged plot were broadcast while one suspect remained at large.

At least one tabloid newspaper had even been tipped off the night before the dawn raids, and its reporters put on standby to race to Birmingham.
...
Paul Snape, vice chair of West Midlands Police Federation, which represents rank-and-file officers, said: "The police force is asking the question, where did it all come from? There may be political reasons for it, such as what was going on at the Home Office and at Downing Street."

Tayab Ali, a solicitor representing one of the nine suspects, said the Home Office would be guilty of "the clearest hypocrisy and double standards" if it was behind the briefings.

"People in government are quick to complain that those involved in the cash for honours inquiry may not receive a fair trial, but there appears to be no such regard for ordinary criminal suspects or suspected terrorists."

According to the BBC,

Mr Bakr said his parents had told him they had aged 10 years while he had been in custody.

"Now who is going to replace that?" he said.

also criticised "amateur-type interrogation" by the police who, he said, had subjected him to "random questioning" about notes written on pieces of paper by his young children.

The police have their own story, of course.

In a statement, West Midlands Police said the Crown Prosecution Service had been involved in the examination of evidence throughout the investigation.

They said: "In all such operations people may be released without charge at this stage, while others may remain in custody for further investigation.

"This is normal and to be expected in large, complex criminal enquiries where a number of arrests have taken place."

In other words, it is now normal for British police to arrest people against whom they have no evidence.

They said they still have a "large amount of evidence seized during the searches to examine" and investigations are continuing.

The Scotsman reported that

terror suspects can be held for up to 28 days without charge, but only if the police can persuade a judge they need more time for questioning

detectives were granted a further 72 hours yesterday to quiz the seven other suspects.

No doubt they will spend most of the next three days asking more questions about notes written on scraps of paper by young children, and looking for more wild geese.
File under: BBC, bogus terror, corruption, Tony Blair, torture, UK
Email ThisBlogThis!Share to TwitterShare to FacebookShare to Pinterest
Posted by Winter Patriot