VSOP in Williamsburg: Chimp Shovels Manure, Dems Lap It Up 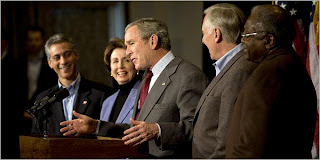 According to Jeff Zeleny in today's New York Times,

WILLIAMSBURG, Va., Feb. 3 — In a rare appearance before an audience of Democrats, President Bush said Saturday that he did not question the patriotism of those who disagreed with his Iraq strategy and asked lawmakers not to let dissension over the war entirely erode their trust in him.

How bizarre! The fact that we are in a war at all -- the story of how we got there -- shows clearly that there is no basis for anyone to have any trust in him.

“I welcome debate in a time of war, and I hope you know that,” Mr. Bush said.

If I were in that audience I'd have been thinking

Since when? Is this why we have these newfangled "free speech zones"? Is this why your minions screen every guest and every question at the so-called "town meetings"?

I would have been livid, with all detectors blaring, by the time he got around to

“Nor do I consider a belief that if you don’t happen to agree with me, you don’t share the same sense of patriotism I do. You can get that thought out of your mind if that’s what some believe.”

Aha! So that's why you and everyone you could coopt have spent the past five years traveling around the country saying exactly the opposite -- all on taxpayers' money?

And then I would have calmed down a bit and done something rational. It would have gone like this:

“We share a common goal, and that is to keep America safe.”

But I wouldn't have been asking that question for very long. I know very well why he's saying things like that.

The president’s words were met with applause from House Democrats...

Clapping like well-trained seals, the Democrats smile their self-satisfied smiles and think:

He understands us. He trusts us. He wants to work with us. We've finally arrived.

But meanwhile the murdering chimp is licking his chops and thinking:

You are now officially onboard the global criminal enterprise formerly called "The Global War on Terror", which we now call "Keeping America Safe".

Of course all this "what if" is completely invalid, because of another "what if":

If I were a politician I'd have been dead a long time ago.
File under: manure
Email ThisBlogThis!Share to TwitterShare to FacebookShare to Pinterest
Posted by Winter Patriot