Global Warming: It's Worse Than We Think 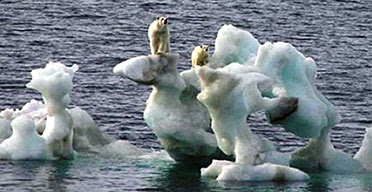 Predictions by international scientists that global warming will lead to a sharper rise in temperatures than previously thought made sobering reading yesterday. But what is the major factor that has driven their gloomy conclusion?

Dramatic flips in the way ecosystems absorb carbon dioxide will see oceans and vast swaths of land falter in their ability to draw up the greenhouse gas, allowing it to build up in the atmosphere and cause more warming. The phenomenon is known as a positive feedback - where global warming drives changes in ecosystems that themselves cause more heating.

Guardian science correspondent Ian Sample makes a number of good points in Saturday's "Why the news about warming is worse than we thought: feedback", not least with the subtitle: "Oceans, soil and trees will become worse at absorbing carbon dioxide as temperatures rise". Sample continues:

The warning came in a major report on climate change published yesterday that suggests average temperatures could rise more than expected - by as much as 6.4C by 2100, unless greenhouse gas emissions are reined in. The report, from the UN's Intergovernmental Panel on Climate Change, has upgraded its 2001 estimate that temperatures would rise by at most 5.8C, because at the time the feedback mechanisms were either unknown or poorly understood.

The "estimated average global temperature increase by 2100" is hardly relevant to anyone alive now, but that's what they talk about all the time. This estimate has been revised upwards by approximately 10% since 2001 (the last time it was estimated). It's usually expressed in degrees Centigrade, which is not at all helpful in America. In Farenheit, the numbers are even worse.

Six years ago they estimated it would be about 10 degrees hotter by the end of this century; now they think it will be more like 11.

What's the difference? Scientists call it "positive feedback", but it's not "positive" in the everyday sense. In this usage, "positive" means "reinforcing the trend". And the trend is not good.

Ice is white and it reflects most of the sunlight that hits it. If the ice were not there, the water or soil beneath that ice would absorb more sunlight, converting it to heat. Thus when that ice melts, the area beneath it will absorb more heat (rather than reflecting it) and this (positive feedback) will increase the rate at which things heat up, causing more ice to melt and in a nutshell, the warmer it gets, the faster it gets warmer.

As Ian Sample explains, scientists have known about the positive feedback of melting ice for a long time, and they took it into consideration in their 2001 estimate. But since then, they've discovered more positive feedback mechanisms, such as the thawing of permafrost. As Sample tells it,

In 2005 [...] researchers discovered that a vast expanse of western Siberia was undergoing an unprecedented thaw. The region, the largest frozen peat bog in the world, covering an area the size of France and Germany combined, had begun to melt for the first time since it formed 11,000 years ago [...]

The team, from Tomsk State and Oxford universities believe the million square kilometre peat bog could begin to release billions of tonnes of methane locked up in the soils. Methane is a greenhouse gas 20 times more potent than carbon dioxide.

[...] If methane seeped from the peat bog [...] it would effectively double the atmospheric levels of the gas, leading to a 10% to 25% increase in global warming.

There's more where that came from.

Last year Peter Cox, a climate modeller at Exeter University, found a similar feedback mechanism and warned that warmer temperatures could force soils around the world to release their stocks of carbon into the atmosphere, potentially driving temperatures up by a further 1.5C. He called for poorer countries to be paid not to cut down their forests as a possible solution.

As the world warms up the oceans become less able to dissolve carbon dioxide. Warmer oceans are also having an adverse effect on carbon-absorbing marine phytoplankton, the organisms that lie at the very bottom of the aquatic food chain. As warming continues scientists fear that phytoplankton will begin to die off, creating a positive feedback cycle where warmer oceans release more carbon which in turn leads to more warming.

There are probably more sources of "positive feedback" that we don't even know about yet.

"Previously these feedback mechanisms weren't well known about, and they have only recently been taken into account," said Dr Le Quéré. "We are very likely to find more of these feedbacks because now we are looking for them. At the moment we are not seeing their effects too strongly, but these are going to become a big part of the picture."

There's a lot of talk in the global media about urgency, about how much we can get done before we reach The Point Of No Return...

... which was in our rear-view mirror two years ago!

UPDATE: According to Chris Floyd's newest piece for Truthout, Bush backers are offering scientists $10K apiece to "say it ain't so". A great read, as always. And a seriously FUBAR endeavor, as we've grown to expect from these people.
File under: climate change, Germany
Email ThisBlogThis!Share to TwitterShare to FacebookShare to Pinterest
Posted by Winter Patriot