Iran to US: If You Attack We'll Respond; US to Iran: We Won't Invade 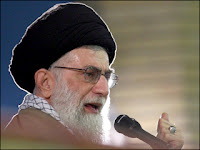 This just in, from Reuters via the New Zealand Herald: White House says 'we're not invading Iran'

Iran's Supreme Leader Ayatollah Ali Khamenei said on Thursday his country would target US interests if it came under attack.

Who wouldn't? Or perhaps I should say: isn't Iran under attack already? Or haven't the Iranians connected the recent terrorist attacks with covert US support for an anti-Iranian terrorist group?

"He's spinning a hypothetical about something that is not contemplated," White House spokesman Tony Snow said.

Do you notice how the White house never says "We're not contemplating attacking Iran."

Just offhand I'd say the US could do a lot of damage to Iran without invading. So a promise not to invade Iran is not worth the pixels you're looking at, especially coming from Tony Snow.

And therefore, I'll file this one under "manure" ... at least until further notice.
File under: Iran, manure, New Zealand
Email ThisBlogThis!Share to TwitterShare to FacebookShare to Pinterest
Posted by Winter Patriot