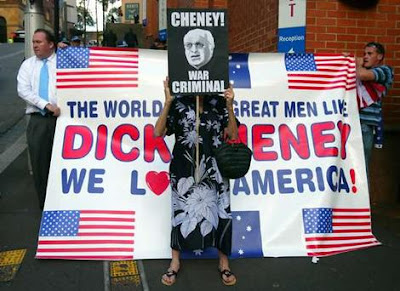 Police and anti-war protesters clashed violently in Sydney during a massive security operation to protect the Vice-President [...] Four people were arrested during the two-hour protest outside Sydney's Shangri-La Hotel, where Mr Cheney was giving his speech.

This from Australia's The Age, which ran the above photo with the caption: "Love him or hate him, members of the public make their feelings about US Vice-President Dick Cheney known in Sydney yesterday. [Photo: Lee Besford]"

I'm still laughing at the picture.

Meanwhile, inside the hotel, Cheney spun out his ever-more-elaborate New Domino Theory for an audience strangely devoid of high-level Australians:

Mr Cheney said a withdrawal of troops before the Iraqis could properly defend themselves would allow violence to spread across the globe.

Many jihadists would head for Afghanistan and others would undermine moderate governments across the Middle East, while other terrorist groups sought victims on other continents, he said.

"We have a duty to stand in their way," Mr Cheney told a meeting of the Australian-American Leadership Dialogue, notable for the absence of most senior members of the Howard Government.

Mr Cheney [...] said terrorists wanted to seize a country in the Middle East and use it as a base for attacks on governments that refused to meet their demands.

Their ultimate aim was to create a caliphate ranging from Spain, across North Africa, the Middle East and South Asia to Indonesia. "It would not stop there," he said...

Of course not. It wouldn't stop at all. Not as long as Cheney's making millions of dollars every year from it. What does he care?

America was glad to be fighting alongside a country like Australia, which never abandoned its mates, he said.

But the Prime Minister, and other senior members of the Government, including Foreign Minister Alexander Downer, were not present to hear the praise, given during the only public engagement of Mr Cheney's three-day Australian visit.

Mr Howard, who did not meet Mr Cheney's plane when it arrived on Thursday night, put a higher priority on yesterday's water summit with state premiers. He will meet Mr Cheney today.

So instead of being greeted by his "mate" the Prime Minister, Cheney was welcomed by the leader of Australia's opposition Labor Party, Kevin Rudd.

And as The Age notes, there are very clear differences in opinion between the two:

It was clear yesterday that Mr Rudd and Mr Cheney differed in their views of the war in Iraq, with the Labor leader depicting the conflict as a religious civil war requiring a political solution rather than a fight against terrorism.

During a visit by President George Bush in 2003, Government ministers lined up to shake the hand of the US President.

What a difference four years makes!

Perhaps Dick Cheney would have felt more comfortable with the state premiers at the water summit.

And why not? It was good enough for John Howard!
File under: Australia, Dick Cheney, national security
Email ThisBlogThis!Share to TwitterShare to FacebookShare to Pinterest
Posted by Winter Patriot