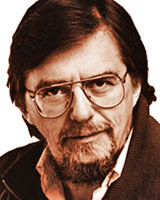 Many people listen to the White House these days and conclude a United States attack on Iran is imminent: "To be quite honest, I'm a little concerned that it's Iraq again," as Senator John Rockefeller, the new chairman of the Senate Intelligence Committee, said recently.

But if President Bush gives the order, then General Peter Pace, chairman of the Joint Chiefs of Staff, will face a big decision.

Some senior US soldiers were worried about the strategic wisdom and even the legality of invading Iraq, but nobody resigned over it. It was obvious the US would win the war quickly and cheaply, and almost nobody worried about the aftermath.

But an attack on Iran is different, even though it would not involve American ground troops, because any competent general knows this is a war the US cannot win.

Who says there's a war the US cannot win?

Why, Gwynne Dyer, of course. He's a veteran of two navies and a respected military historian; he knows the difference between slogans and realities. Dyer's most recent column comes to us today from New Zealand.

Air strikes alone cannot win a war, however massive they are, and they probably could not even destroy all of Iran's nuclear facilities, which are numerous, dispersed, and often deeply buried.

Many Iranians would be killed, but what would the US do next? It would have very few options, whereas Iran would have many. Iran could flood Iraq with sophisticated weapons and volunteers to fight against US forces.

It could throw international markets into turmoil by halting its oil exports. It could try to close the entire Gulf to tanker traffic, and throw the world economy into crisis.

And any further US air strikes would simply harden Iranians' resolve.

How about NOT doing it?

So would General Pace attack Iran if Bush ordered him to? His only alternative would be to resign, but he does have that option.

Senior officers like Pace, while still bound by the code of military discipline, also acquire a political responsibility. Like cabinet ministers, they cannot oppose a government decision while in office, but they have the right and even the duty to resign rather than carry out a decision they believe disastrous.

The resignation of the chairman of the Joint Chiefs of Staff - and possibly several of the other chiefs as well - would be an immensely powerful gesture. It could stop an attack on Iran dead in its tracks, for the White House would have to find other officers who would carry out its orders.

It would doubtless find them, but such a shocking event might finally enable Congress to find its backbone and refuse support for another illegal and foredoomed war.

But what would it say to the Terrorists?

My guess is both the Joint Chiefs and the White House understand that the option of resignation is on the table. Consider the dance that was done around the question of Iran and "Explosively Formed Penetrators" in the past couple of weeks. (EFPs are glorified shaped-charge weapons that can penetrate armour. Most major armies have had them for several decades.)

On 11 February, US officials claimed the EFPs that have killed some 170 American troops in Iraq since 2004 were Iranian-made, and supplied to Iraqi insurgents by "the highest levels of the Iranian government".

White House spokesman Tony Snow insisted they were being supplied by the Quds unit of the Iranian Revolutionary Guard.

Familiar stuff from the run-up to the Iraq war - but then something unscripted happened. In Australia, General Peter Pace said Iranian Government involvement was not proven: "We know that the explosively formed projectiles are manufactured in Iran, but I would not say by what I know that the Iranian Government clearly knows or is complicit." A day later, in Jakarta, he repeated his doubts: "What [the evidence] does say is that things made in Iran are being used in Iraq to kill coalition soldiers."

Methinks the General ought to know enough not to undercut his Commander in Chef while he's trying to catapult the propaganda!

There is a civil-military confrontation brewing in the US not seen since President Truman fired General Douglas MacArthur during the Korean War.

But this time, if the general acts on his convictions, he will be in the right.

There are some people around here looking for a much more serious civil-military confrontation than the president firing a General. And pulling for the military, too, unless I am very much mistaken.

The "thinking" goes: If we can't have gridlock in Congress then maybe we can get some mutiny in the Pentagon. Yesterday I wasn't sure whether that would qualify as thinking or merely wishin' and hopin' and prayin' ... but today, having read Dyer's most recent, I could almost be persuaded that there's hope for us yet.